I must admit, I did not fully read Suzanne Wright's Call To Action until this morning. I am familiar with Autism Speaks, and their agenda, so I had a pretty good idea what it would contain. I wish I could say I was shocked, dismayed, or even surprised at what I read when I took the time to fully consider the entire letter, and what it meant, but I wasn't.

I would like to counter Autism Speak's ideas that autism is somehow new, and somehow only affecting children. I would like to somehow understand how an organization could have so much access to autistic advocates, yet deny those people a say in advocating, and speaking on behalf of a 'disorder' they're diagnosed with. I would like to ask them why they alienate us. Why they scream for support from the government, but offer not a dime to adults on the spectrum needing support today.


I think those ideas have been expressed enough by others. They are certainly valid points that deserve answers, but today I want to speak from another point of view.  You see, I hear the critics of those that oppose Autism Speaks. Those people want to divide us into camps of functioning labels, and speaking categories.  Those parents don't care what I have to say as a person with Asperger's, because I am not like their child, they say. Okay, fair enough. I don't necessarily agree that there is a line that we can arbitrarily draw in the sand about who is too low, or high  functioning for respect, love, and equality, but I digress from speaking as an autistic person self-advocating for this piece. I don't agree with functioning labels, nor do I keep company with autistic people claiming to be superior to neurotypicals. I see no distinction in better or worse when it comes to neurology.  There is differences, but there is no right, wrong, better or worse brain type.

I want to speak today about my son Beans. He is the youngest out of all three of my children. He has an older brother diagnosed with mild autism. Beans is what anyone would consider profoundly autistic, and cognitively delayed. There is no way around the severity of his autism, or the fact that he will need assistance for the rest of his life. He is going to turn ten years old this Thursday. I could go on, and on about all the things he can't do, but I will suffice it to say he functions at about the level of a 12-18 month old. Given his age that is quite a disparity between the size of his physical body, and what he is able to do.

When Beans was two years old it was brought to my attention that he wasn't meeting his milestones. I had not worried. Neither of my boys were, but that was okay. They would do things in their own time. I have always been pretty accepting of individuality among my children.  He was evaluated, and diagnosed at the age of two-in a half with moderate to severe autism with a global developmental delay-including a cognitive delay. Yes, that whole long spiel was written out as the whole diagnosis. Still, I was not terribly worried. I viewed this as just a piece of information that will help me understand my son better. Maybe life might not be the way I expected it to be, but that's okay. I now knew how to adapt things for my son, and knowing meant being able to take action.

So, I did what most moms do when their child is diagnosed with ASD. I went for Google. As I researched I came across Autism Speaks- Autism Everyday video.  I watched it, and re-watched it.  I soaked in these people, these families, and the reality they set out before me.

They spoke of it in front of their children. They called them burdens, and one spoke openly about wanting to kill herself, and her autistic daughter, but could never, because she had to live for  her typical daughter.

I cried. I sobbed for days after watching this. I laid in bed at night wondering if my son would grow up to be a soulless monster. I was certain that even though my life was not as devoid of light, and love as those on the video it would soon be.

Autism Speaks convinced me that my son was a horrible burden. Autism would soon drain my family of any joy that we have ever had.

That was for about two weeks, then thankfully.... ever so thankfully, I came across a website of autistic advocates. It was a crudely put together site full of stories written by the first generation of autistic advocates. Eight years ago this was not the norm. It was like a little gem I found hidden under the doomsday autism resources online. This site changed my life, my perspective, and my boys' lives.

On that site, autistics spoke of the discrimination the Autism Society of America doled out. The ASA used to not be autistic friendly, but thanks to the work of autistic advocates years ago that isn't the case today. They laid the groundwork for acceptance. They were not supported by many parents.  They did this on their own. They spoke up, and changed one of the most influential autism organizations that was there at the time. For their efforts, I will be forever grateful, because without them who knows what I would still be thinking about autism. The degree in which their words changed my way of thinking is nothing short of life changing. It has made my life as an autistic person better, and has done the same for both of my sons.

When I think back to that time of diagnosis, and the fear mongering video I saw at that time I know that I can't let other parents feel that way. I know that it is my turn to give back to the world, and make it better the way others before me who taught me to see my children, and myself as valuable members of society did. I can't sit here in silence as Autism Speaks puts out another statement that degrades the value of autistic people everywhere. Do we need more support, more funding, and more resources? Yes. You bet we do. We need to advocate for these things as a matter of giving to our fellow human beings, and not fundraise like autistic people were a tsunami that swept the world.  Tragic is labeling your own grandson as a burden of tomorrow's generation. As a society we tend to not treat burdens very well. Us autism parents know this every time we read a story about another autistic child abused at school, or in a residential home. That is the treatment burdens get. That is what society does with groups of people that we see as less than. When we spread the word of how much of a drain autism is on our resources, and how broken autistic people are we are setting a whole entire group of people up to live with that stigma.

I cannot let my son pay that cost just so Autism Speaks can obtain more funding.

Autism lives here. It bares only the burden of stigma that has been thrust upon us from unscrupulous people. I wish others would not use the way mine,and my boy's brains work as a means to extort money from others. Please, Autism Speaks- stop speaking for us, about us, and around us. 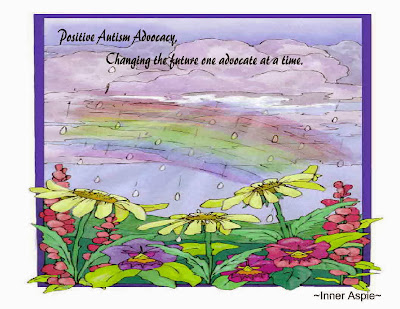