Discussing staring, and #autism in public- join the conversation! 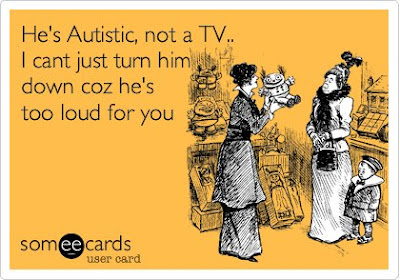 I shared the above image on my FB Page and Marilyn G. commented:


"Wanting to share and needing input. My autistic son was always a quiet one, so I never had to experience some of the feeling that you have. Many times I have been out in places and there has been a child being "loud". My immediate response is of concern and my reaction is to look at the child and the situation to evaluate in lightening (super mother power) speed if everything is ok with the child (I have seen a child being verbally abused in a Target to the point of tears before). I have never judged that child nor their parents during the "loud" period. But now because of so many posting saying things like glances or judgements of strangers, I feel that I can't look over to see if that child is ok, because I am afraid of offending the mother or father just for looking their way. My heart is going out to the child and even the parent in that moment, yet I feel that I will be misinterpreted and actually cause that mother or father more discomfort than if I had just not turned to see if all was ok. Is it possible that this is a real thing that occurs and some are to quick to judge? How can I feel comfortable caring?? I want to feel my heart go out, but I am concerned that just my glance would cause pain for mom or dad....where only understanding and connection is happening....not even a word spoken...not even one bad thought ever."


This was a very good question.  It forces the people that have special needs kids to answer some difficult questions about why we're offended, what if a child is in danger (meaning not ASD, but rather something is wrong) can we look to evaluate the situation, so that we ca intervene if needed?  How do others know when it is okay to look, or when it's hurtful?

I saw a program the other day called Head Games on the discovery channel about staring.  They basically set up an experiment in an auto shop waiting area where there was about 4 or 5 actors sitting around. In would come the clueless person that had no idea that the experiment was happening. They all acted friendly at first, but then gradually they all started staring at him. First, subtly, then not so subtly, then pretty much blatantly in his face stare downs by every person in the room.  In every situation the subject got up and left.  The psychologist explained that in a situation where someone is being stared at in public it automatically switches on the fight or flight area of our brains. (Most of our brains, that is... ) Humans are social creatures, so when people stare they are identifying you as not one of them. You don't belong in their group and you are not welcome. This makes the primitive part of our brain react . We get nervous, and have to figure out in a pretty quick hurry, are we going to defend our territory, or are we going to run away? This is pretty hard wired into neurotypical brains. It all occurs on a level that you're not even aware of when it is happening.  I was happy to see this episode, because my brain does not react this way. I rarely see people staring, because I rarely look at other people, and when I do I don't look at their faces.  Unless, it is balntant staring with an obvious expression of negativity I will not notice, nor will I care.  This explains to me why NTs act the way they do, and now I can understand their POV better, I can back off the judgments about them being dramatic about stupid things that don't matter. Now I understand, they can't help it.  It's how they're hardwired, the same as I can't help the fact that I don't look at all that social information that is happening around me.

Now, we understand why people get so upset when others stare at their special needs child, what can be done? Can we change the way we react to stares? Can we choose to respond differently, even with our brains sending us into fight or flight mode? Yes. I think we can. I think a little bit of knowledge can go a long way.

First, I want to point out that the majority of the people that I actually catch staring are doing so, because they know about autism and want to approach me and my family.  They want to say something, but don't know how to approach us.They want us to know they are one of us and belong to the autism community, or they saw my van sticker and want to know where they can get one.  They are analyzing and seeing if it's okay. I have that happen every so often and I do the same when I see a child/person with autism.

Sometimes, they don't know much about autism, but know that my Beans is obviously not a typical child and they want to acknowledge him. They want to include him and say hi to him, just like they do anyone else.  It's their way of non-verbally acknowledging to him and us, "I see you.I acknowledge your presence. I accept you here as you are in this public space and I support you, but I can't just say that, because that would be odd." So, they stare, often times until they feel comfortable enough to say something.

Then, you have the people that don't know about autism and don't know what to think of Bean's noises and movements. They stare wide eyed and oblivious to the fact that we can see them staring. I think this is the most common. People will look at things that are different. It's in our nature to identify differences and try to figure the situation out. I find it illogical to go out into public and expect people to NOT stare. In my life, that is just pretty much setting yourself up to be disappointed and upset, as well as making a big deal out of every public venture with your ASD child. It does not help their self esteem for you to do this, believe me, I know.  Learn to let go and be okay with others looking and your kids will, too.

Of course, you do run into the people that really believe that people like Beans should not be out in public, being noisy and messing up their idea of a perfect world. Unless they are directly interacting with you, I say ignore them.  Let their discomfort about their own personal hang ups be their own.  They have to live in their narrow world, but you don't.

So, how do you feel about staring? What would help you to be more comfortable with others that are just looking out of curiosity? What advice would you give strangers that just want to support you and give you encouragement in public on how to go about that?
- September 25, 2012 6 comments: