On my Inner Aspie FB page an interesting discussion took place the other day, and a question was posed that I said I'd further think about, and extrapolate here after doing so.

Basically, it was a discussion about introverted vs extroverted aspies, and how would one go about making an introverted autistic feel more comfortable in a group, or even social setting. I would like to first point out that an extroverted autistic person may or may not be auspicious. Sometimes, they are the most noticeable, due to how on display they are naturally. They  loudly violate social rules that make me sit back, and cringe as they do it. Sometimes, I am too hyper-aware of the rules, and am over thinking everything, instead of being in the moment, which is somewhat needed for a fluid social exchange that is positive, and rewarding for all sides. The thing is, most of my social skills are not intuitive. They are intellectual, so it is hard for me to be go on autopilot around people. Mostly because I just don't have much to say to most people
, but I will get to that later. Before I break down some ways to help the introverted autistic (and probably the introverted person of any neurology) I'd like to share a story that will illustrate my points probably more than any block of rules ever could.

A few years ago, when I was not even officially diagnosed yet, My family, and I attended a local Asperger's support group. About half of the very small group was NT, and the rest AS.  The NTs were mostly the ones chatting, with the exception of one AS lady that was typically off topic, by miles.  The other AS person there was quiet, and never spoke. He sat there scrolling through his phone, and what would probably look to others like shutting the group out, but I knew he paying attention. He was just nervous, and probably could not look up at everyone, because it would be too overwhelming, so he was looking at his favorite stuff online that has a sense of familiarity to it. At least, that would be my guess, because logic dictates he would not take the time to come to meetings if he didn't want to join in, even if it was just by being an active listener. At one point the discussion turned to specific computer programs, and he did have quite a bit to say about that, but with the exception of those 5 minutes, he did not speak. I did not either, except for a few words. One topic was to correct that godawful misinformation a counselor had given one parent. I about fell out of my chair, and had to correct her, as well as ask the other people in the room who were on the spectrum if they felt the same, but short of that, I didn't speak much at all. That was my one, and only experience with an AS group in person.

Moving on a year or two later, my husband and I join a skeptics group. When we arrive at one of the events the guy from the AS meeting happens to also be there. Small world. You'd think we'd say something to each other like that, but we do not. I see him, and he sees me. It's amazing that I recognized him. We sit by each other as we eat, and we are together in every picture of that, and other events we attend after that. We never speak a word to each other, or make eye contact. I know who he is, and he knows who I am. I'm okay with sitting in silence, and he is, too. Everyone around us tries to make small talk with us, but ends in awkwardness. I have nothing to say to broad subject matter, and he doesn't, either. 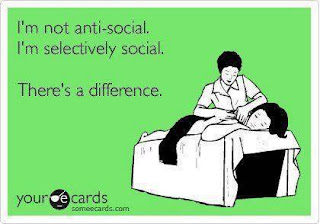 That was pretty much a breakdown of what makes us comfortable. My husband does not understand this, and it drives him crazy. Why do we not speak to each other, he asks. I am sure, if we spent enough time around each other, and a subject came up we would discuss it, but just to chat out of the clear blue for the reason of filling silence? No.

What makes me comfortable in groups/social situations are:

The ability to be quiet, or talk without any preconceived notions about what either if those actions mean,

A topic matter that I know something about, or people that I have something in common with.

People around me not being obnoxious. Loud people really send me into sensory overload.

Let me have enough time to process, and speak. This one is hard, because as I said above, I may not have anything to add to the conversation, and will bail if I feel pressure, but on the other hand, I may actually have a lot I want to say, but can't due to my mind getting too overexcited. Loud people will often take my pause to steal the discussion away, and with that my turn to speak. If this happens more than twice I likely will leave, and not return to the group, because I will feel defeated, and left out, as well as frustrated.

I think the main point is, just because I am quiet, and never speak during  group activity that does not mean I had a bad time, or am uncomfortable,  Sometimes, I feel just fine being a quiet observer of a group/social activity, and enjoy myself just fine doing so. Don't assume to know what makes me happy. I'm not you, and never, ever, ever ask me out loud in front of a group why I am so quiet. This is humiliating, and is the equivalent of being socially outed by a group. I will not return to that group, and likely won't be your friend after that, because friends don't treat each other like that. I can't tell you how many times I have come home from an activity, and cried and cried, because I was so embarrassed, and felt like there a huge flaw had been pointed out in front of everyone, because someone said that to me. The same goes for asking me to smile. Don't do it. It feels like I am being socially ostracized for not behaving like everyone else, and if you ask something like that I feel bullied. Don't be a bully.

I think that covers the main points that I have about making an introverted autistic, like myself feel comfortable in social situations.  I'm sure that I didn't cover everything, so if you're an introverted person and have some more tips, please leave them in the comment section.