Standing Up To Murder Apologists

It happened again. Another mother/caregiver murdered her disabled son. This incident seems to be more disturbing to me than many. His name was Austin Anderson, and he was just 19. You'd think the world would be on fire wanting justice while mourning the untimely, torturous death of this innocent young man at the hands of his mother, right?

For one, I had to go to more than one link to even find the victim's identity, even though the murder's is clear through any, and all articles I have seen thus far. While sometimes I have seen this happen when the detectives are unsure of the identities of the deceased, or when there are other minor siblings involved in the case they may not always release names none of those things are true in this situation. In this situation Austin was an adult. He was an adult that is mostly referred to as "Lightwine's son"  in most of the articles. Way to erase his identity, media! His name was Austin Anderson. He should not be referred to as his killer's son.

I felt like I needed to get that part off my chest, because this next part is where my tone turns a little. Maybe, a lot from what my regular readers are used to. I don't typically write a lot of in your face types of pieces. Today I feel like I am. For me, this is pushy, and more edgy than usual. It might not seem so to others, though.

I have. All of the above. Sometimes all in the same post, combined together in a ball of tightly wound contradictions that feel impossible to pull apart. Doesn't mean I haven't tried, but the posters, and those that stand with them hold on tightly to their beliefs.

Such as these comments I came across under the article on FB: 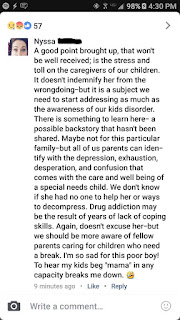 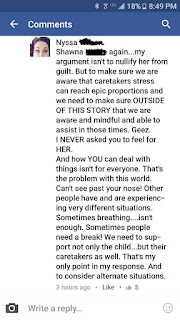 Here we have the all encompassing doublespeak where a parent engages in a discussion about how they aren't excusing a killer's actions while actively looking for every which reason under the sun the person could have been driven to madness , thus postulating it can be understanding that a person under such strain could indeed kill their child, but they shouldn't, but they could, but, I mean she is a monster. I'm just saying if she had more help maybe she'd not have been such a bad person, and would have not been a drug addict with a terrible temper, and not have made terrible, selfish choices, like killing her son, but you know, we need to talk about respite.

That's what I hear when I read those posts, and others like it. I said that there is no separating the two. Either she is wrong, or she isn't. Either you sympathize with a murderer, or you don't, because in this case it really is that simple. When other people are murdered people do not use the space underneath of the story on social media to discuss how bad the killer had it. They don't come up with every excuse the killer may have ever had in their entire life to have made that choice against the deceased. It is so vile. It is so disgusting. It is so inappropriate to me that anyone would use the space underneath any article about a vulnerable person's death to discuss their own needs, or how the killer's needs are not being met. That is the most selfish, unemphatic thing I have ever witnessed, and would not happen if the person that was killed was typical, or non-disabled.

So, here is where I ask all of you to help.