The Scariest Words An Autism Parent Never Wants To Hear

Ask any parent what the scariest words they can imagine coming from their spouse's mouth that pertain to their child and one of the answers is likely to be "I can't find _____" (insert child's name).  This is especially true of you're a parent of an autistic child.  I had the unfortunate experience to hear this the night before last.

Let me start from the beginning.

Sunday morning started off well. My father in law was in town and wanted to take us all out to do things around town.  My husband let me sleep in while he got up with the boys, and even went to go get doughnuts.  It was looking to be a pleasant day.

We got into town and settled on eating downtown.  The boys were less than thrilled and Beans especially didn't care for the venue change.  When I say venue change, I mean not fast food.  :)  Bubby could not handle that there was no plan to speak of, and was instructed that he was to let others make the plans for once, by Grandpa.  He always gets to do what he wants, and it was someone else's turn. We got through lunch with Beans picking at his food the way he always does, but not eating much.  Bubby asked upwards of 20 times (in different ways) if we would pleeease go to a museum. Beans and museums aren't a good mix, so we were unable to honor his request, much to his dismay.

We went to a few places and did a bit of window shopping, while taking turns staying in the van with Beans, in the places he finds too noisy or overwhelming.  When we arrived at the mall I thought it was a good place for him to finally get out a bit and enjoy his day.  He typically likes the mall.  However, he remembered he does not like escalators, and the first store we went into had one.So, I had to carry all 55 pounds of screaming Beans out of Sears to the van with onlookers wondering (I'm sure) if I was a kidnapper.

By the time all was said and done when we got home it was almost time for bed.  The first thing everyone in my family does when we get home from a long day out is scatter to spend some time alone to regroup.  After that it was late and definitely time for baths and bed.

It wasn't long after putting the boys to bed that I hear "Mom, Bean's stinky!" Which is pretty common. No big deal.  Except this time Beans decided to get naked before pooping.  It was a pooptastrophe and it was everywhere.  I handed him off to Dad to get cleaned up and I scrubbed the carpet and the heating vent. Yes, he pooped on the heat register. We got it all cleaned up and put him back to bed at about 10:30.  I had to go back in a time or two to tell him to get to bed, and give Bubby a drink.  But, relatively quickly after there was silence.  I thought Beans had settled in and gone to sleep, as it was late.  My husband and I watch TV for awhile and decide it's time for bed at about 12:30. 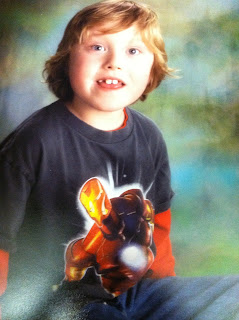 We go to do the routine nightly checks on the boys before bed.  Usually to uncover faces, and make sure Beans has his blankets on him.  Then I hear "I can't find Beans" from my husband.  I think to myself, what do you mean you can't find him?  I go in the room expecting him to be curled up in the corner of the bed with blankets covering him. I quickly find this NOT to be the case as I remove all the blankets from his bed. Then, I turn my head and see one of the most scary things I've ever seen in my life.  The window and the screen is open. I yell "The window is open!" at my husband who proceeds to try to run so fast through the house that he falls down and gets hurt several times.  He is not calm in emergency situations.  We get outside, in our robes, barefoot, in the cold running around calling for Beans. I begin heading for the backyard, because that's where he often goes when he runs outside. About as I am to turn the corner I see a police car driving down the street.  My husband and I begin running for it, yelling "I lost my son!"  When we finally get to the car, the officer replies "Is it this one?" We say yes and he asks if he's autistic.  I'm so dizzy and out of breath I can almost pass out in the middle of the street.  I don't think I've ever been so scared in my entire life.

The officer brings him in and explains that he was called to the next street over about an hour and a half ago because he was found trying to get into someone's house.  They opened the door and let him in, then called the police.  I so appreciate whoever did that! The officer brought him back to the police station for awhile, then decided to drive around the area he was found to see if any doors were open to indicate maybe where he had come from.  That's when he came across us. He asked us if Beans was always moving like he was at the station and when he brought him home, and we verified that yes, he never is still.  He always moves and is always into things.  The officer said he couldn't keep up with him very well at the station.  I'm guessing he thought that he could take him to the station and write up a report, and found out that was not possible in a room that's got much of anything in it. I'm sure he was knocking everything off of desks and shelves and trying to leave.  Trying to eat any plants, paper, or whatever he could find.  We live in a very small town, so I doubt there were other officers around to help much.  There's not too many on duty at once. I think the officer had enough experience with Beans to have some empathy as to how he could be more than a handful.  I was so worried that they'd think we were awful parents.  He remarked how many gates we have in our house and extra locks.  We thought we were on the up and up in safety.  Guess beans found the weak spot.

We purchased window alarms yesterday.  I don't know if they'll work or not, because he keeps removing the sensor, which does set the alarm off.  I know when he removes it, but I don't want to have to be constantly reattaching the alarm everyday, and him getting his ears hurt by the shrill sound of it.  I wish I could say he was more cognitively aware of the fact that removing the alarm is going to hurt his ears, but I'm not so sure he'll get that cause and effect.  Maybe, he will.  I'm still considering other safety measures for his window, and a few others he can get to.  I will be doing an entry next on all of the safety precautions that we have done so far to help others (especially newly dxed autism parents) put together a safety kit. You can find that entry here.

This is far from over as Beans ability grows and he learns new skills, but remains unaware of danger.  I am astonished that I have sent out e-mails for help in finding him a medic bracelet that he can wear, but not remove and I'm met with a lot of "i don't knows' from people like his autism specialist and developmental disability case manager.  This has to be common in the autism population, especially those that are severely affected by their autism/and or intellectual disability.  There is nothing in place at this time to help our children if they are lost.  More about all of that in my next entry about safety.  I am just glad that ours was a happy ending and my handsome guy was returned safely to us.
- March 13, 2012 30 comments: