A couple days ago I was in the kitchen preparing what I meant to be a delicious, light, fluffy white cake. I generally have my own recipe for improving on box mixes, but for whatever reason on this day I mismeasured, or misthought, or... I don't even know. I ended up adding way too much milk. I didn't realize this until I was spooning the mix into the cupcake liners. I noticed that the batter was really runny, and then my mistake dawned on me. Oh no! I didn't have another cake mix on hand. I didn't just want to toss out what I had made, but what could I do with a runny cake batter? I began digging through my pantry and came across a box of brownie mix. Could this work,  I wondered. What else could I do? So, I mixed the brownie mix into the cake batter and hoped for the best.

I was not disappointed! Oh man, ya'll, this cake was good. Like, I'm gonna make it again like this, but on purpose good! So, I thought maybe some of you might like to try it, too.

Notes before you get started: I don't know if you can use another flavor of mix and get the same result. The same goes for using the whole egg. I would surmise that doing one, or both, would change the texture, but I am not sure on that. White cake mix is lighter, and has a different texture to it than other kinds, probably due to the whites being used as opposed to the whole egg. 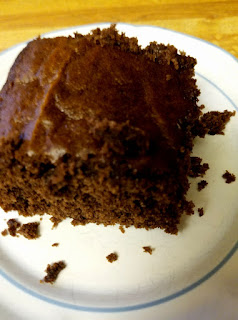 Email ThisBlogThis!Share to TwitterShare to FacebookShare to Pinterest
Labels: recipe

If you've been reading my blog for very long you might have sensed a theme of self-empowerment, and an undercurrent of acceptance of what is, even if that's not what I'd wish. But, these things are hard. I know that there are a zillion and one article out there on how to accept yourself, how to be kind to yourself, and more. They give a few steps, and speak about how wonderful it will be to achieve this feat. Thing is, for some of us that have deep ingrained issues that stem from childhood, and mental illness this is not a challenge that can be worked on like a to-do list, crossing each item off in order on this neat notepad of emotional life skills. No. This is an ongoing challenge that requires constant dedication. For myself, I have to re-evaluate my inner talk, my outer talk, and my emotional state frequently, and then adjust accordingly.

For example, recently I was having a lot of work done on my house. This meant a trove of workers coming in and out for several days. I began to fret about what I was doing, how I was presenting myself. My anxiety shot up, and I worried what they were thinking of me. Negative phrases were flowing through my mind. I worried I looked lazy