I read an article about How autism parents have stress that's comparable to that of combat soldiers   a couple months ago.  At that time, I was upset and in disagreement with the sentiment the article stated.  This was before Bean's jaunt about town the other night.  Since then, my attention has become centered around safety, even more so than it was.  I promised a blog post about some safety measures to help with children who elope, and I will get to that, but for now, I can't hardly organize my thoughts to write this rambly post.  I think it gets to a point where one has been operating on such a high level of stress for so long that that becomes the norm for them.  I think that the other night was one of those moments where I was pushed even beyond that 'norm' and into a space that I have been unable to cope as well with.  It almost feels like my coping skills were like a game of Jenga.  My structures we constantly being tested, but I was able to readjust and keep things up. Until that one piece that caused the whole thing to fall down.  That was the other night for me.  The other night was the one piece that compromised my whole coping methods and since I have been reeling with what feels like everything crumbling around me. 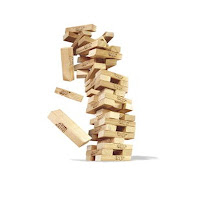 I always try to write about solutions to issues that autism might present, either firsthand, or even for parents of ASD kids.  I try to be sensitive to the fact that what I write might bring up spirits of those reading, or bring them down.  I feel that there is plenty of the latter in the autism community, so I try to keep on the more positive side.  I'm just not feeling it this week, though. I'm tired and I'm worn out.  Not just from my kid's autism, but from my own and life in general.  Finances are still really rough here, causing friction, as it tends to do when there's not enough to go around. My husband and I are stressed with all of that to the max, which lends itself to us fighting with each other.  My tower of well placed blocks are tumbling down.

I now realize that much of this stress has been accumulating for quite some time.  I was just unaware of the strain.  After a particularly bad day I called my mother in law for support.  (Since my own isn't on speaking terms with me) Bad idea.  She basically just told me to change how I think about my situation.  If I just changed my perception, then it wouldn't be so bad. She also told me to take a vacation.  No offer of help to do this.  Just that I probably need one.Wow, how ingenious.  Never would have come up with that little effing gem on my own.  I've only had 2 vacations in my whole life and neither have been in the last 9 yrs and none have been alone with my husband. I've never had one with him, not even a honeymoon.  So, I was left even more depleted than before I had called.  It is clear to me that probably one of the things that drove my husband and I together (married 14 yrs yesterday) is the fact that we are both almost completely invisible to our families.  It's a sad commonality that we really can't figure out the reason for, other than we aren't dysfunctional alcoholics that make up drama to fill our lives, like much of our relatives.

I guess this is all part of life.  We live and we learn.  We devise coping skills as life hands us more to cope with.  I am trying to build healthy ones that will allow my life to grow in a positive way, but right now that's hard for me to see from where I stand.
- March 22, 2012 8 comments: