Awkward Encounters of an Autistic Woman

I am strolling through Walmart, actually power walking, because that is my usual speed. I round the corner of the cereal aisle, and out of the corner of my eye I see a lady, and a boy. I think to myself that that person looks a bit familiar, but then I am in an area shopping where there's a lot of people I see frequently that I don't know. I get a couple feet away, and I hear "Where is the rest of your family?" It's the lady that I passed. I study her, and her son's face for a moment, and realize she is my husband's cousin. She is offended. I have done this to her before. I try to explain that when I am shopping I am in the zone,and not paying attention. This isn't the first time I have blogged about my Face Blindness. I know that I have made so many social mistakes with this particular person that there is no way to fully recover. I just try to be gracious possible about the incidents, and hope she just thinks I am a bit loopy, and not snobby. It's not personal.

The other times it has happened it was with people I barely was acquainted with. Those situations I can kind of shrug off, because it's not that unusual to not recognize an acquaintance you don't know very well. However, I have known this person for over 16 yrs. I don't see her often, but honestly I should recognize her. As I thought about this after I got home another similar memory came to mind.

It was 15 years ago, just after my daughter was born. I was going out to dinner with my husband, and a big gathering of his family who was visiting. We got in the door, and one of bus boys seemed to take notice of us
for some reason. After we were seated he kept coming over to our table to refill drinks, and take plates, even though he wasn't our waiter. His behavior was odd. It got to the point toward the end of the meal where he was literally leaning up against me while pouring coffee. My husband looked like he might come undone a few times, and once asked him to keep the hot coffee away from our baby. He seemed to be trying to get attention, and I was really confused by the sighs from the other people at the table, and my husband's eye rolls. 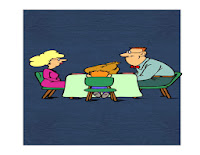 We exited the restaurant, as this guy held the door open in what appeared to be the grand finale of attention seeking. My husband kept giving me looks, and at last remarked what a serious ass my ex was later that night. He wanted to know I didn't tell him to go away. I didn't know what he was talking about. Then he explained it to me. The bus boy was my ex-boyfriend, and I had not recognized him! I had no explanation for this at the time. I just kept replaying the incident over, and over in my mind. How could I know someone on such an intimate level, yet not be able to recognize them? How can this happen? Not only that, but other than the guy being too in my space I had not really noticed him much at all. How could I have been so blind? How could I not recognize his voice, his face, or anything?

Since then, I am a little better at noticing the social cues of what's going on around me. Not a lot, but I think I would have noticed that his behavior was out of place now, instead of being oblivious to it like I was then. I still struggle with paying attention to my surroundings, though. That is probably the biggest contributing factor to face blindness, and the awkward situations that I encounter. I simply forget to pay attention to people. I have tunnel vision, and hearing. I block out everything, but what I need to concern myself with. I am sure that part of this is for the sensory overwhelm prevention. The other is just part of autism, I think. I am not concerned with what others are doing. Socially, that piece is just not there. I have walked right past people talking to me numerous times, and have even gotten into trouble at work for ignoring people/bosses as they speak to me. It is embarrassing to hear of these situations secondhand.

Since, this incident I have decided to try to make an effort to actually look up, and around at what's going on around me when out. Try to really see people. Usually I am looking straight ahead, or at my feet.  Cars seemingly drive themselves, as I rarely ever look at the drivers. I realized the other day that that is something others always do, and it is a safety thing. God only knows what social info I am missing out on when I don't. It's simply not safe.  Others could be communicating with me about something very important on the road, and I wouldn't see it.  Of course, if I do this all the time for too long it will be too much. I think the reason I do it is to guard against sensory overwhelm, and it will undoubtedly take my mental, and physical energy to be more socially alert.

If you're on the spectrum have you had similar issues? Do you forget to pay attention to people? Are you Face blind, and if so do you think being inattentive contributes to that?
- November 22, 2013