In the first two sensory solutions posts I discussed the different types of sensory input and began to break down the different ones by category starting with visual senses first.

In this post I would like to discuss the sense of auditory as it relates to someone with sensory processing issues.

I feel like this topic is one of a very wide terrain. It will be a difficult task to cover every auditory type of issue one might be prone to with sensory processing issues, and autism. I will try to touch on all of the ones that I know about, and have heard of in this post.

From what I have seen auditory issues are the most frequent of all sensory issues to affect people on the spectrum in a way that really alters our life. I have found this to apply to those diagnosed with Asperger's to those with profound autism. We all tend to be able to relate to each other in the way of auditory stimuli wreaks havoc on our lives at times.

As with all sensory issues those auditory in nature can be hypo and hyper sensitive.  With auditory issues I find that there is certain things that bother each person that would make them hyper, and hypo sensitive, as well as have what is known as Auditory Processing Disorder- which I will cover in greater detail later in this article.

What are some the things that can cause someone with auditory processing issues to be sensitive to noise?

* Children yelling/babies crying.
* Dogs barking.
* Horns and sirens
* Motors
* White noise- such as fans blowing, water running
* Chewing noises
* Breathing/snoring noises
* Any repetitive banging, ticking, or clicking
* Lots of people talking at once
* High pitched noises- some of which others seem to not even notice
* Toilets flushing
* Phones ringing
* Other people's music
* Voices in general can cause overload
* Any noise that is unexpected
* Any noise that is above the level of a quiet conversation has the potential to be too much for someone with an auditory processing issue.

What are some of the things that can cause hypo sensitivity to noise?


* Some people need some noise to channel into to concentrate, such as music, or a fan.

* What I find happens more often than not is that due to being overloaded with noise a person who had auditory issues may need to drown out the undesirable noise with one that they can control, such as turning up music, the TV, or the most common.... verbal stimming. More on that later.

What are some of the situations might some of these types of issues occur, and what are the signs?

Any place that there is multiple types of stimuli has the potential to be overwhelming to someone with SPD. I can identify these places immediately, but it always surprises me how much those without SPD/autism are not aware of all the constant stream of stimuli coming at them at all times in these environments. They simply filter it all out. Sometimes, I think they are the ones who are hyposensitive to noise, because they tend to crave it, and to create any activity, or situation to be exposed to levels of noise that leave those of us with auditory processing issues running.

When out in public there are always a barrage of noises coming at us at all times. Depending upon where you live, and such just stepping outside might be a challenge if you are sensitive to certain noises. Loud motors, horns honking. sirens blaring, music pounding (many with APD tend to be especially sensitive to bass in loud music) and children yelling may be all present right away. Some of us may live in a quieter community, but the threat of any of those things happening at the drop of a hat can make one quite tense, and almost ready for flight or fight while leaving our home.

My nonverbal son is especially prone to being overcome by almost any noise. He is in anticipation of any violation of his personal space at all times when at home, and out. Just the sight of a toddler, or baby makes him react by screaming, and trying to run away. This may look like he is an unfeeling young man who hates kids, but it has zero to do with his sense of friendliness to children, and everything to do with protecting his extremely sensitive ears. He doesn't like dogs near him for the same reason, and spends quite a lot of his day with his ears covered. It would be ideal if he were to allow us to put headphones, or noise reducers on him, but he is not willing to do that yet. I am still working on it, though.

Crowded places also have the ability to overwhelm us. With so much noise there is no way to filter out just one. Almost any restaurant has music going, as well as people trying to talk over the music. We have that regular level of noise, but then underneath is the dishes clanking, ice machines running, fans going, and if depending on where you are possible ice cream, or coffee machine pausing to begin at any moment. Those of us with auditory issues cannot just focus in on our friend trying to talk to us, or if our number is being called over the loud speaker.There is no way to block out the unwanted, and isolate the noise we want to hear. It begins to be a jumbled mess.  When this happens, I know that I personally start to lose other senses. The room starts to be hazy, and every light begins to be too much, and every smell is, too. I can't decipher what I see, and I can't tell what I am hearing. I know people are talking, but my brain is unable to unscramble their words to make meaning.


When this happens to my youngest son, Beans he will begin to hum, and make verbal noises. The louder his environment the louder he gets. At home, we often find ourselves competing with the TV over his noise, which he always wins, because the louder we turn it up the louder his noises get. It is his way of filtering out his environment to cope. He is 10 now, and I feel old enough to begin learning how to care for his own sensory needs.When he is stimming as loud as all get out I will sign to him 'too loud' and ask him to go to another room. I am unsure how much he understands why I am asking him to go to another room, but at this point there are 2 other autistic people in the home that he is overloading when he does that. I respect his need to cope, and want him to be able to tend to his sensory needs, but I ask him to please go to his room to do so when it's getting very loud, and hard to handle for the rest of us.

My older son also has trouble with auditory issues. Many of the ones I notice with him are listed on the graphic. When Beans gets loud for him by crying, or stimming he can come across as pretty rude, and demanding. I am working on teaching him to advocate for himself in a way that doesn't look so rude to others. When Beans is in a sensory overload he might cry, or even hit people. We all tend to see that as his way of communicating that he is overwhelmed. That is true. It is the only way he has at this time to communicate that, but when Bubby starts complaining about something (often with language that sounds very abrupt) that is overwhelming him he is often met with an disdain from adults, and others about how he needs to be respectful, and not so negative. While, I agree that he needs to learn a better way of communicating his needs that will come with practice, and maturity. I feel his message is just as important as Beans. It's just the fact that he is verbal, so others tend to hold him at a different standard than they might his nonverbal brother that make the reaction to his pleas for quiet different.

When I was a young child/teen I would routinely get sent to my room (or grounded) for having a fit at the dinner table. The reason, I cannot handle people chewing. Not all people, and not all the time, but certain people make noises when they chew that I tend to hear that no one else can. It drives me to complete overwhelm instantly. There might be days that I can handle it better than others, which is true for any sensory issue. They tend to not be static in the way severity is dependent on several factors ranging from anxiety, sleep levels, to hunger, and previous sensory issues through out that day. However, I cannot sit by certain people while they eat without any background noise for a whole meal without having a meltdown. This is NOT within my control. I can't overcome this, or just try harder. We do not do family dinners at the table. It isn't because we are those people that are too busy, or too TV involved to put family first. It is because I cannot handle the noise of chewing. We sit spread out in the living room while watching TV. It is the only way I can handle being in the same room with all the eating noises. There are a lot of people that give me looks about this, but they're not the ones that have to be put into a state of extreme rage, and panic I feel due to the sensory assault on my ears.  Being flexible, and able to let go of what we think is the right way to do things in a traditional sense is probably one of the biggest strengths ones can possess when raising sensory kids.

So, to wrap up this post I have included a graphic I made awhile ago about APD when my blog was called Inner Aspie. 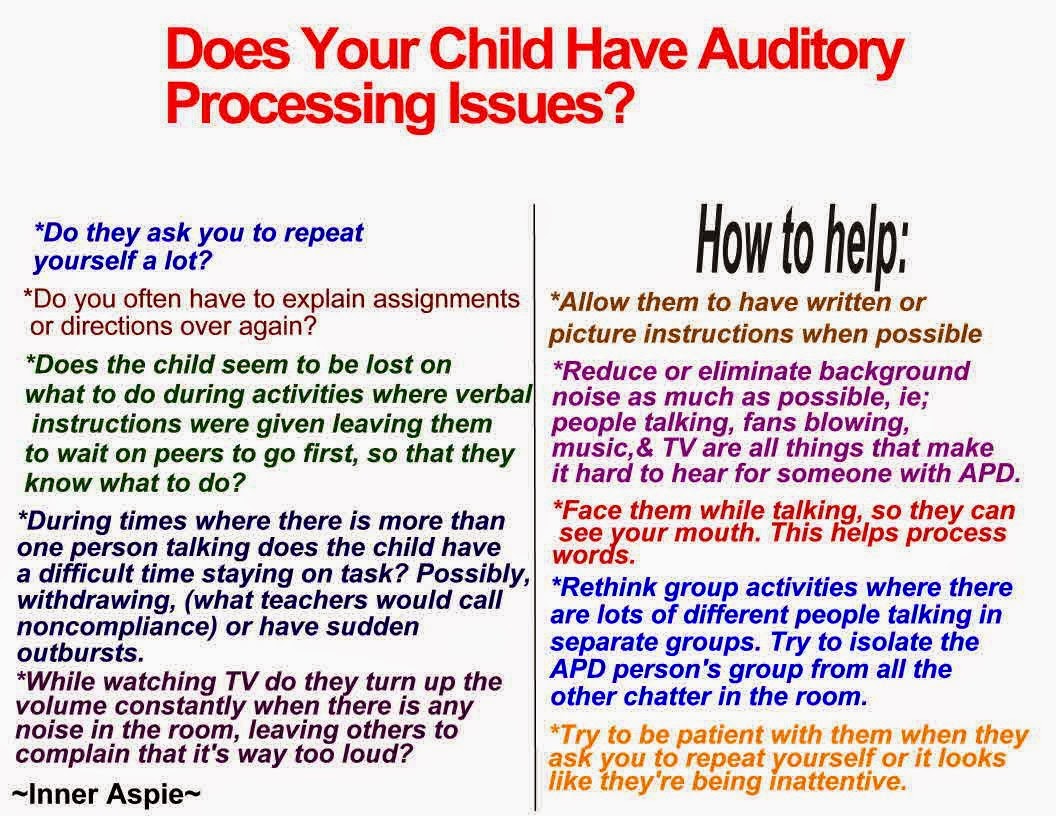 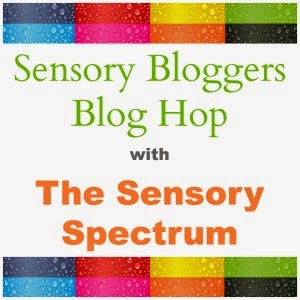