My #Aspie Brain Was Set on Buying Milk. Not Socializing- failure to divide attention

Yesterday my daughter, and I were talking about how her boyfriend's dad was upset, because my husband didn't stop and chat with him at our local supermarket the other day.  He thought it was rude, but I know it was that my husband was in a hurry, and didn't think about it. I know this because it's very unusual for my husband to see someone he knows out in public, and not stop, and have a long chat.  Since he owns his own business, and meets lots of people this happens all the time.

Then my daughter says to me, "Mr. S. (her computer teacher) said that he's seen you at the store a few times, and he said hi to you, but you didn't respond. I told him you just don't really notice people."

I never heard, or saw him.
I'd never ignore one of my kid's teachers at the store, even the ones I don't like.  This has been a huge problem all of my life.  I'm fairly certain this is the reason I have trouble making social connections, and being acknowledged by others. The other day, a local parent called my husband to ask if we were going to the special ed advocacy meeting Tuesday. Granted, they are a local doctor that my husband sees more than the rest of us, but I'm sure they had to have had my number, and know that is my area more than his.  I felt like I can't even be included with others in my area of focus, but then I wonder how many times I had been near this family in public, and not acknowledged them?  If they don't feel like I like then, they aren't going to call me.

I don't know how to fix this issue.  It's caused huge problems all of my life.  It's like I only have one channel that comes in clear all the time.  The rest of them are all the way off, or have terrible reception.  I am going through the store, or the bank, or whatever... I am focused on what  I am doing.  I don't tend to notice who is around me, or what they're doing.  I don't attend to the social factor very well, even if I m trying.

I know that part of the issue is that I likely have a mild-mod case of face blindness. So, even if I am noticing a person, unless they really make it obvious that I should know them, or I have for some reason remembered their face (which is not likely, unless I have seen them on a regular basis) I am not going to recognize who they are. I will treat them as a stranger, because to me in that moment, to me they are.

The other part of the equation is that I have auditory processing issues.  It's like I don't hear everything going on around me, especially people talking.  My mind just literally filters it out. When I was young, I often missed being asked out by boys, because they'd be trying to talk to me in a social situation, and I would not respond to them at all. If I didn't see them standing in front of with their mouth moving, I would not often hear them.  I don't know if this is an Asperger thing.  I just know it is embarrassing, and causes issues.  I also would get poor marks on my work performance, because my boss(s) would say they stood behind me saying my name, or trying to communicate what I needed to do, and I would act as if they weren't there.  I simply was in my own world, and did not hear them. It was never purposeful. 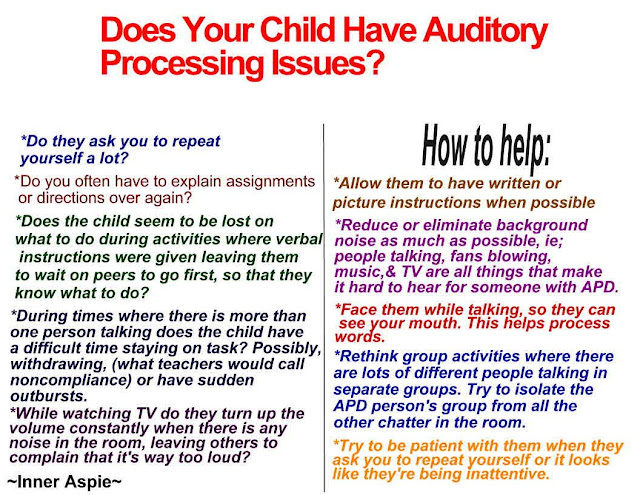 I have not figured out how to remedy this situation.  I am unsure if I even can. I don't know if I should email my daughter's teacher, and try to explain the situation. He won't be her teacher next year, but will be Bubby's the year after next.  I am not sure what the etiquette is in this situation. Further complicating things is that due to how super quiet (and frankly mature) my daughter is, he is always asking her if everything 'is okay at home', which I feel to be a bit insulting, whether he means for it to be or not.  Just because a child is not acting all obnoxious doesn't mean there is a problem at home.  My daughter contends that she gets attention at home, and does not need to vie for it from teachers, and other adults like many of her peers. I don't know if I even owe him an explanation. I wish CJ would have told me about this when he told her, and not months afterward.

Do you have any of these issues? How have they affected you?  Have you found any solutions?
- June 02, 2013