At any given part of the day us women know that we are under a tremendous amount of scrutiny from every corner of the earth. It weighs us down, and objectifies us in ways that much of the time we are not even aware of what the next source is going to be. We pass this judgment ourselves to other women, and we receive with defensive scowls, and add it to our ever running insecure commentary that lurks in the back of our darkest subconscious. The whispers of every word we hear, and nonverbal gesture we soak in from our environment that defines what it is to be a woman in our culture sits back in our collective subconscious forming our thoughts, our values, and ultimately shaping our character, and influencing our goals. It's only when we give some of these automatic thoughts real insight do we begin to see the flaws, but we have to first be willing to accept that maybe what we think we know could be wrong. That's the hardest part of any belief system, isn't it? It's challenging a set of beliefs that we have held to be true automatically all of our lives, and accepting it may not be, and if it isn't other beliefs we hold that hinge on that one may not be, as well. It threatens to shake us down to the core of who were are, who we know, and where we come from. Cognitive dissonance is always an easier route, though not always better, or more healthy.

And, so how can this look at times when you might encounter a set a beliefs about women in general that seem so powerful that it overshadows all else?

It can, and does come along in all sorts of forms. But, there is one that stuck out to me the other day in particular due to the heinous nature of the actions involved with the people in the situation. I think that to most this didn't seem like it could be a women's rights issue. It certainly didn't seem like the woman involved could be setting an example that anyone would want to follow, and that part is true. I read this news
article: 2 Week Old Killed by 6 Year Old Brother, Mother Charged   It was awful. Stuff that nightmares are made of. What was that mother thinking leaving children in a sweltering vehicle like that? Why was that child so violent? What was going on with this family? These are all the questions I had. Such a tragic situation, and one that could have been avoided, and a life that could have still been here.

Then I see the comments on FB under the original article I read.

It does not seem that most share the same kinds of thoughts as I. Not even. After reading all about the violence, the stairs, the beating, the hot van, the mother ignoring the urgency of the situation, just all of it....the most common comment centers around the mother's age.

I could not believe what I was reading. Comment after comment fixated on how horrid it was for this woman to have a child at 67. Maybe it's unusual. Maybe it's not a choice I'd make, but to read about all of the situation that just happened, and to only concern yourself with how old she's going to be when they're such, and such....is ludicrous to me. Not to mention a moot point.

It's just hard to put into words how that is the perfect example of how over the top society is about ownership of a mother's body, or perhaps a woman's body? As if no matter what the extenuating circumstances are everyone has a say in what a woman does with her body. It's not illegal to have a baby at that age. It might not be everyone's cup of tea, but it doesn't have to be. The amount of anger, and disgust over the baby at 67 overrode the death of the baby. An older woman choosing to give birth raised more controversy than the violent death of a newborn when discussed on social media. Let that soak in for a second.

I sifted through hundreds of comments on that thread, and saved a handful to share. 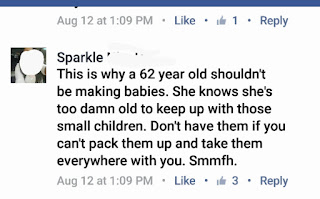 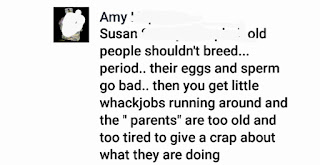 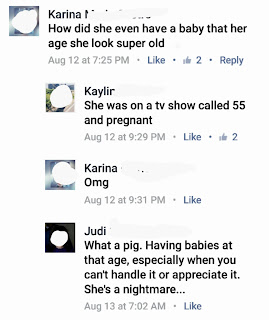 These were not just outliers, unfortunately, but a common theme. I am really hoping that as people become more aware of how damaging, and backwards this attitude is it will become less common, but first we must become aware of it. We must know it exists to understand the nature of how wrong it is, to be able to recognize it. That is what compelled me to write this maybe not popular, but much needed post.
- August 17, 2016